Installing Selenium-RC as a Windows service

Installing Selenium as a Windows service is reasonably straightforward - based on the instructions for Fitnesse, which unfortunately seem to have been deleted from the Fitnesse wiki, but which have been reproduced here.

There are two parts to doing this - the first, registering the service using srvany.exe (which wraps any executable as a service), and the second, adding the keys to the registry to tell srvany.exe how to launch Selenium-RC. srvany.exe is a part of the Windows Resource Kit, if you don’t have it already you will need to download it from Microsoft.

The following will register the Selenium service - on the command line (all in one line):

You should now be able to start the service - if you get an error about the service failing to start due to a logon issue, make sure that the user you are using to run the service has been granted Log On As A Service permission (editing the service logon credentials in the Services MMC snap-in and saving the changes will cause this to happen automatically.)

The ‘sc‘ utility can be used to create, delete or edit a Windows service. It can be used for any executables (as opposed to installutil, which can only be used for .Net services). Its help is available using sc /help (and is also available on MSDN); however, I found the output slightly confusing, so for my own reference here’s an example for creating a service for the Subversion server:

This passes two parameters, the binPath and the DisplayName (the rest are the directives Subversion expects when running as a service). The trick here is the space between the ‘=’ sign after the parameter name and the parameter value; the service won’t be installed otherwise.

When running an application pool in IIS under a different user than the default, for an application that requires write access to the Event Log (for example, when trying to create a new event source in your application), it is necessary to grant that user sufficient access to the event log in the registry. Otherwise, you would receive the following error:

However, using Windows 2003 Server, I found that granting ‘read’ access to the event log wasn’t enough; the full set of permissions I ended up need to grant to the app pool user on the HKEY_LOCAL_MACHINE\SYSTEM\CurrentControlSet\Services\Eventlog key in the registry is as follows: 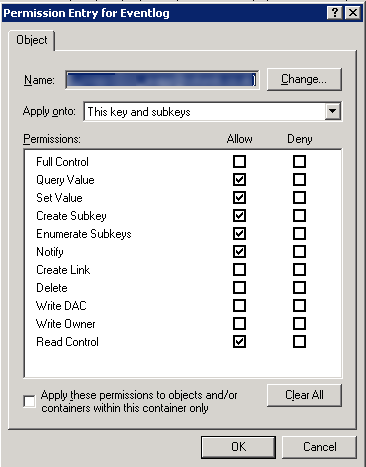 I hope that this helps someone. 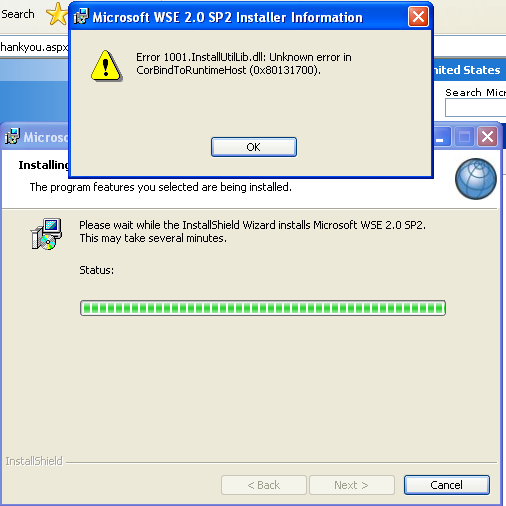 You can then start remote desktop up to span multiple monitors via the command line:

Or by editing the .rdp file in Notepad: